Debbie can most likely be found in a local coffee shop chatting with students, staff or community members about why Judaism is amazing, inspiring and challenging. Debbie prioritizes pluralism, innovation, collaboration, and leadership development and her favorite Hillel moments bring these values together in ways that are advancing Hillel at ASU to become one of the best Hillels in the country. She welcomes conversations with students from all political and religious backgrounds. After completing SafeZone training, Debbie is recognized by Arizona State University as an Ally for the LGBTQIA community. The Covenant Foundation recognized Debbie’s leadership and ambitions with the Pomegranate Prize award in 2015. In December 2020, Debbie was recognized with Hillel International’s highest honor, the Richard M. Joel Exemplar of Excellence.

Before coming to ASU, Debbie spent seven years at the University of Pennsylvania Hillel, overseeing a multi-tiered engagement approach to Jewish life on campus. While at Penn, Debbie completed Weinberg ACCELERATE: Hillel’s Executive Training Program. Debbie began her Hillel career at Washington University in St. Louis where she was a Steinhardt Jewish Campus Service Corps Fellow for two years. Originally from Framingham, MA, Debbie holds a B.A. in psychology from Emory University and an M.A. in Higher Education Administration from New York University, where she also worked in residential and fraternity/sorority life and planned a national conference about the Jewish college student experience. Debbie lives in Phoenix, AZ with her husband Ben, son Gabe and daughter Emma. They enjoy supporting the local food movement (buying, cooking, and eating!), working out, exploring the Valley, and traveling.

Born and raised in the San Fernando Valley, Taylor is a proud California native. For her undergraduate studies, Taylor attended Sonoma State University where she received a B.A. in Psychology and held numerous leadership roles in residential and campus life, as well as Sonoma State Hillel. Upon graduation, Taylor decided to take her passion for student life full-time and served as the Director of Engagement at Santa Barbara Hillel. Building meaningful micro communities for a diverse student population, Taylor strived to bring intention to all of her engagement efforts.

After three years in sunny Santa Barbara, Taylor decided to trade in her beach bag for a backpack as she pursued a dual-degree master’s program in Los Angeles. She received a Master of Social Work from USC and a Master of Jewish Nonprofit Management from Hebrew Union College - Jewish Institute of Religion. During her time in graduate school, Taylor focused her research efforts on stress and wellness management, studying best practices in mitigating burnout and integrating effective wellness initiatives into the workplace.

Taylor is a recipient of The Rosalind Ellenson Prize for Commitment to Social Concerns at HUC and The Order of Arete at USC for her leadership efforts on and off campus.

When Taylor is not at Hillel, she is most likely exploring a new coffee shop, hiking one of Arizona’s trails, or perusing the local farmer’s market with her husband, Zach. While Taylor will always be a beach bum at heart, she is so excited to be exploring all of the beauty the desert has to offer! Forks Up (and Fight On!) ​

Born and raised in Minnesota, Suzy is proud to be among the “frozen chosen” (along with Alaskan Jews of course) who have endured real winters and enjoyed summer days under 100 degrees. When she isn’t busy unpacking Jewish texts or reinventing Jewish tradition, she enjoys cycling, cooking, and comedy.  Having lived in Boston, Jerusalem, Los Angeles, Santa Barbara, and D.C., she is happy to be in the Phoenix area where her family now lives part-time.
​
After graduating from Brandeis University in 2002, with a B.A. in History and Art History, she worked as a community organizer. She set out to become a rabbi as a way to balance her passion for Tikkun Olam (healing the world) with her belief in the need for Tikkun HaNefesh (healing one’s self).
​
Most recently, Suzy served as a Senior Organizer at the Religious Action Center where she worked with Reform synagogues to restore the vote 1.5 million Floridians. As part of the inaugural cohort of the Jewish Emergent Network, Suzy served as rabbinic fellow at Sixth & I where she created innovative shabbat, holiday, and interfaith programmings for young professionals in the D.C. area.

Before moving to D.C., Rabbi Suzy enjoyed running on the beach and hiking in the mountains of Santa Barbara, where she served for four years as an Associate Rabbi at Congregation B’nai B’rith. She was ordained by the Reform Movement at HUC-JIR in 2012 and is a proud alumna of the Wexner Graduate Fellowship

Mikayla is a graduate of Northern Arizona University where she majored in Geology. While completing her degree, Mikayla was involved with NAU’s Alpha Omicron Pi where she served as VP of Academic Development, was a Senior Student Ambassador of the Office of Undergraduate Admissions and Orientation, and served as “Headmistress” of the Harry Potter Appreciation Club.

After graduating from NAU in the spring of 2016, Mikayla spent a year in Israel teaching English at a religious school in Ashdod. During that time, she completed fellowships with the Masa-Jewish Federations of North America, Hillel International, and Birthright Israel. Mikayla also served as a Hillel Shabbat Scholar, working alongside Hillel Professionals on Birthright Israel trips implementing Shabbat programming. It was while in Israel that Mikayla discovered her passion for Jewish education and outreach.

During her tenure at ASU, Mikayla has completed fellowships with Hillel International, PJ Library’s Women’s Leadership Fellowship and completed a certificate in Experiential Israel Education with the iCenter. Currently, Mikayla serves as the President of the Council of Religious Advisors on the Tempe campus of ASU. Mikayla graduated with a Master’s Degree in Management of Technology from Arizona State University in 2021 where she concentrated her studies on understanding and utilizing engagement data to further Jewish Engagement at ASU.

Mikayla grew up as a member of the “frozen chosen” in Alaska and was active in the Anchorage Jewish community from a young age. Mikayla loves and is always excited to discuss Israel, rocks, Dodger baseball, and Harry Potter trivia! Mikayla lives in Tempe with her husband Derek and their two cats Bubba and Sissy.

​Hailing from Rockville, MD, Jake graduated from Tulane University in the Big Easy - New Orleans, LA - in Spring 2020. A Political Science major with a concentration in International Relations, Jake opted to balance his reading-and-writing intensive studies with a deep dive into the prolific Tulane Athletics program (Roll Wave!). Whether working behind the bench as the Women’s Basketball Student Manager, manning the field goal nets as a member of the Game Operations team, or making up the entire student section at Yulman Stadium, Jake considered himself one of the few die-hard fans of the Tulane Green Wave.

Also at Tulane, Jake served in a variety of roles at Tulane Hillel, finding a community he never realized he was searching for come alive in front of him. Those experiences, combined with his passion for Jewish summer camping, pushed him to become the Engagement Associate at Hillel at ASU in Spring 2021.

As the Engagement Associate, Jake works most closely with first and second year students at ASU, looking to make their first two years on campus (and beyond) the best! Jake also cannot wait to work with students on planning their Birthright trip! Whether you want to talk about sports, studying abroad (Jake studied in London and has endless stories about his European travel), Jewish camp, Birthright or getting acclimated to Arizona State, Jake’s door is always open! 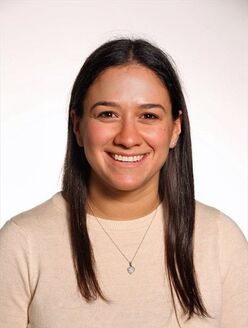 ​Ali Seltzer, Campus Marketing/Development Manager
​​Ali grew up on Long Island and moved to Columbus, OH to become a Buckeye! She graduated from The Ohio State University in 2017 with a B.S.B.A in Marketing and minor in Nonprofit Management. She loved her experience as a Jewish Buckeye so much that she then joined the Ohio State Hillel team, first as an Engagement Associate and then as the Program and Marketing Director. After three years at OSU Hillel, she relocated to Washington D.C. and has started a new chapter with Hillel International where she supports UF, Arizona State, and Vermont Hillels with their grassroots fundraising efforts. Ali is excited to be a part of ASU Hillel community and help tell our Hillel story to our incredible supporters, families, and alumni. Outside of work, Ali has a Bernedoodle puppy, Bernie, who keeps her busy! She enjoys taking time to explore the city through many walks, runs, and bike rides.

Ben is a San Diego native pursuing a degree in Secondary Education (History) with a Jewish studies certificate. He can be found working on a variety of projects around the office this summer!

Rabbi Barton Lee came to Hillel at ASU in 1972 and served as Executive Director for 42 years. He studied at Stanford, Hebrew University, and the Hebrew Union College in Cincinnati where he earned a doctorate. A native of Texas who celebrated Texas Independence day with students, he loved the desert, the Grand Canyon, ASU students, classical concerts, Israel, politics and sports. But most of all, Rabbi Lee loved ASU students, schmoozing with them, helping with problems, or studying Torah as it relates to our lives.